Read my analysis of The Karate Kid‘s Ali Mills here.

Immediately, there’s groaning and head-shaking at the sound of a classic being remade or having another instalment added. Admittedly, when I heard Cobra Kai was in the making, I pictured all the things that could go wrong. They could just lazily invoke the memories of The Karate Kid (1984) while messing up classic characters. The perpetual disappointment of favourite films and TV series being re-made or revived (read: re-hashed) has left me a jaded fan of pop culture in general. I’m looking at you, Season 5 of Prison Break.

END_OF_DOCUMENT_TOKEN_TO_BE_REPLACED

A possible assumption by owners of Carrie Fisher’s previous books would be: ‘I already know her story, this book will be a rehash, so why should I bother?’ Fortunately, this “sort of memoir” focuses on her life in the film industry in detail, rather than a wider documentation of her life on a whole.

END_OF_DOCUMENT_TOKEN_TO_BE_REPLACED 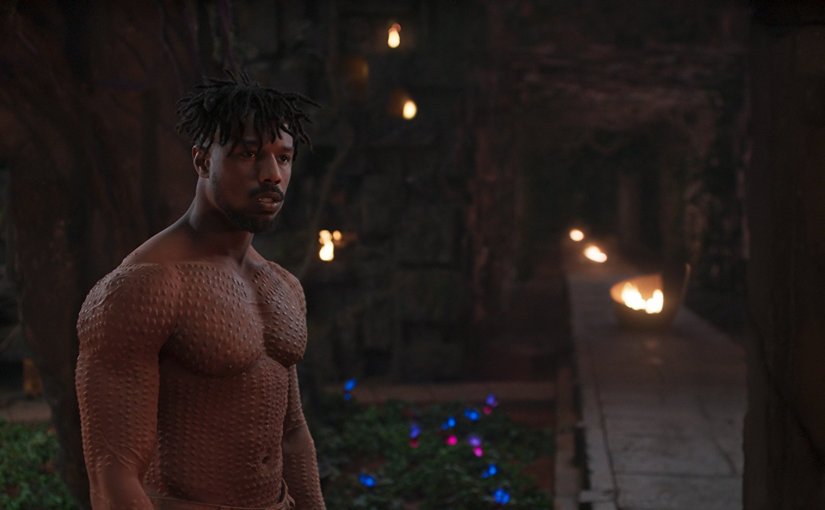 As I’m not well-versed with the Black Panther comics, this post will only discuss the film’s depiction of Erik Killmonger with few references to the comics where relevant. Some of the points made here are also addressed in my analysis of the film’s themes overall.

END_OF_DOCUMENT_TOKEN_TO_BE_REPLACED

For me, many messages could be gleaned by viewing Black Panther; the film says so much and still achieves audience entertainment. Although it’s stated from the outset that the fictional African nation of Wakanda avoided colonisation from Western powers, the film is steeped in post-colonial discourse, among other layers that make Black Panther a thematically-rich blockbuster. The film addresses the after-effects of colonialism and poses the question: how do Africans and African-Americans tackle these problems, together and individually? How can oppressive hierarchies be shattered?

END_OF_DOCUMENT_TOKEN_TO_BE_REPLACED

Click here for Part 2. Well, that finale certainly left you wanting more. Character metamorphoses, realisations, chases, tears, and tender moments: this is what needs to be taken away from the series. END_OF_DOCUMENT_TOKEN_TO_BE_REPLACED Part 1: available here. As predicted, McMafia upped the stakes in episode 7, and with the finale only days away we’re all wondering what the outcome could be.  END_OF_DOCUMENT_TOKEN_TO_BE_REPLACED

The level of criticism McMafia has attracted is surprising. It does, like any other art produced in the entertainment industry, have its flaws. The plot became difficult to follow and slowed significantly in pace (not that slow TV is always synonymous with bad) following the second episode. Nevertheless, it has picked up and things have fallen into place due to the events of episode 6. We’re now left with the fallout of the latter with Alex Godman’s (James Norton) family in danger and his fiancée (well, not for long, if he continues his secrecy) hospitalised following an encounter with an assassin. Those who have stuck through the series are about to have their patience rewarded.  END_OF_DOCUMENT_TOKEN_TO_BE_REPLACED

If you have clicked this post, chances are your will is waning. Alas, there is hope, if you follow these steps: END_OF_DOCUMENT_TOKEN_TO_BE_REPLACED

This Youtuber doesn’t have enough views. If you want a Youtuber who discusses your interests and hobbies in a friendly, breezy and approachable way (who also puts me to shame with her French accent), I present Ophelia Vert.

I’ve never planned a play out this way, but it’s quite a helpful exercise.

(Names blocked out due to influences drawn from real people, and I don’t want to make people uncomfortable, even if it’s in a nice way, which most of it is, but it’s a helpful starting point ANYWAY) pic.twitter.com/21wQ8M0rou

She discusses problems associated with creativity as well as obstacles to language learning. Additionally, if you are looking for videos in your target language, she covers French, Spanish, German, Russian, Swedish and Italian. Language learning can be overwhelming and boring at times * escapes horde of linguists and polyglots *; fortunately, her enthusiasm encourages the viewer to take it up again following a dry spell or lapse in confidence.

She doesn’t pretend to be perfect, which is extremely helpful for those lacking confidence in acquiring another language. As I discussed in my post Anxiety and Learning Languages, “performing” a language delivers the same stress as making a speech in front of a group of people or performing a play on stage.  If this applies to you, then I can only recommend Ophelia Vert’s videos to make yourself at ease with conversation.

No, I’m not a shameless promo bot (my blog posts say otherwise). Nor am I affiliated with Ophelia Vert. That’s my disclaimer over, now get yourself to her Youtube account and be inspired!

Disclaimer: Some media outlets and social media platforms are attributing backlash towards The Last Jedi to rabid White Un-PC fanboys, who decry how the franchise is over-run by SJWs and Feminazis. I don’t qualify as a rabid White Un-PC fanboy: none of these labels applies to me. I’m open-minded enough to say I’m glad people enjoyed the film and that they felt uplifted by it this Christmas (humanity needs a Star Wars film every Christmas from now until the end of time if that were possible!). Fair enough if you disagree with me about the following points about to be made; as alluded to in the title, these are my personal opinions.

I left the cinema feeling disappointed. I knew very well TLJ wasn’t going to be a new-Empire Strikes Back, so I was prepared for some adventurousness with the characterisation and overall themes.  What actually occurred, however, was a complete out-of-character portrayal of Luke Skywalker himself. In RotJ, Luke comes face-to-face with Darths Vader and Sidius. He is intent on turning his father, a mass-murderer and an abusive boss, back to the light. He endures a lightsabre showdown and force-lightning to achieve this. This is someone endangering his life to save a relative.

It would make more sense that he would at least try to save Ben before wallowing on Ahch-To for some years than be overcome by the fleeting desire to kill Kylo/Ben. Again, Luke momentarily courted the dark side during his showdown with Vader. He still came back to the light, intent on saving his father. Furthermore, Rey arrives to inform him that the galaxy (and his sister) need him. His best friend was murdered by his own son and Luke’s nephew and former student. Despite his shame and depression over failing his nephew, those factors should have been enough to spark something of the old Luke. It takes a hologram of Leia from ANH to make him agree to train Rey but still doesn’t answer the call to help his sister.

A point flagged by fans of TLJ is that people change, especially over decades. I agree, however, for the sake of characterisation, it’s important to retain some elements of familiarity. The Luke Skywalker of ¾ of TLJ feels barely recognisable. Granted, he does eventually reunite with Leia and the old Luke seems to be returning. The magic of their reunion is marred by the fact that he’s sent a force-double version of himself. Perhaps his rescue would’ve had more emotional bearing if he sacrificed himself in his physical form (there would be no twin sun imagery to close Luke’s legacy).

Regarding the Rey Skywalker theory: to be honest, I hoped that would be the case. The thought of Rey as Luke’s daughter appealed to me and the theme of two grandchildren fighting over their grandfather’s legacy. The heirs of Darth Vader, if you will. The lightsabre splitting scene would’ve been the perfect embodiment of this. Alas, according to Kylo, Rey is the child of no one special. Personally, I think he is lying; her ignorance would serve him well to mould her into his apprentice, and he did embellish the tent situation regarding Luke trying to kill him. Rey’s question of her parentage was her weak spot and he constantly dangled it in front of her. We’ll find out in Episode 9. I’m aware that many are against Rey Skywalker because they don’t want the protagonist to be another Skywalker. They want new, unrelated heroes. I maintain that the new trilogy will grant their wish, but this trilogy is still about the Skywalkers and their legacy. But this is personal taste.

Another disappointing example is the casino planet Canto Bight. While dazzling and inventive, scenes involving this new setting went on longer than required, slowing the pace. While the storyline added layers to Rose Tico, it didn’t quite mesh with the urgency of the Resistance’s fuel crisis. I also felt that the chilling dictator speech delivered by General Hux in TFA was undone during the opening exchange between Hux and Poe Dameron. Hux was reduced to a tool for humour and that affected his characterisation. Mild humour involving Hux is, of course, acceptable. Nevertheless, the length of the scene damaged his intimidating and unhinged personality.

Of course, there were many positives to be extracted from the film. BB-8 is the star of TLJ. Almost every action scene has BB-8 taking charge of the situation. A spunky droid besting the humans at times is entertaining and fresh; an example of the better humour in this instalment. I also liked the closing message with the slave boy; nobodies can be force sensitive/resistance fighters. Moreover, the mise-en-scene of the throne room scene was almost perfect, particularly the red and black contrast.

Those opposed to TLJ are unfairly labelled as resistant to change: the problem doesn’t lie in the changes, but the execution of them. As a standalone film unaffiliated with a franchise, this is a promising piece of cinema. As a piece in the Star Wars puzzle, it ignores unanswered questions in TFA and itself has questionable character directions. The vitriol spewed from both sides consumes the fandom. Whatever we think or feel about this film: we have one more. It could confirm the plots and themes of TLJ or subvert them completely. 2019 will provide us with the why.